Spring time came, and it was time to start work on the car again. When I got in the car, I had noticed my recently flocked dash, had cracked again. Wasn’t very happy about having to take out the dash again, and I figured the cracks came from my not so professional job the first time. I didn’t bother gouging out the cracks when I repaired my dash, so there must have been only a little filler just smudged on the cracks, proving to not be very effective.

I was ok with it though, it gave me an excuse to get a little creative with the dash, so I purchased some Norton Speed Grip, a Dremel, some fiberglass bondo, some poly flex filler, a little black primer, a new flocking kit. We’ll let the pictures do the talking.

Started out first by making valleys of the cracks, using a dremel zip cut blade, and after, the small drum sander attachment so the valleys were more-so uniform.

Next up was cutting out slots for the gauge pod that I hacked up (i used a defi gauge pod), and cutting out a slot ontop of the cluster for a Defi VSD-x, which I disassembled and what you see in the pic, is the top part of the plastic housing of the hud unit.

The next step was securing the gauge pod to the dash. I used 5 minute Norton speedgrip adhesive. Pricey, but highly recommend, high quality glue which can be used really for anything that requires a strong, permanent bond. 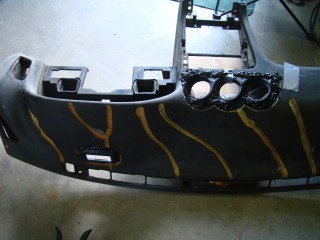 After letting the glue cure, and shaving/sanding some of it away, I slapped on some fiberglass (kittyhair) bondo. This will make sure the dash is reinforced well. 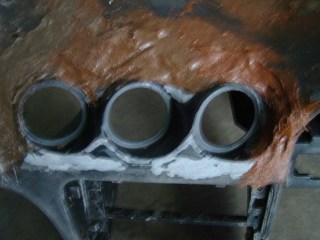 After a few hours of sanding the long strand fiberglass away, it was now time for the glazing putty. Very easy to sand, and self leveling. Also dries quickly. The specific product I used was Evercoat® poly flex filler.Not the cheapest product either, but like all things, you get what you pay for. As I’m editing this post (11/15/2016), its been 4 months and my dash has not “re-cracked”. I had a previous attempt at restoring my dash a year ago. I just covered the cracks with regular bondo, and flocked it. It cracked within a month. It was a real pain sanding off the flock. 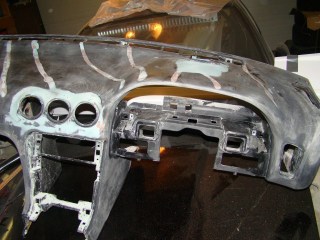 Sprayed the dash with some black sand-able primer. 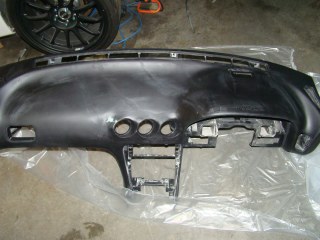 Finally, the flocking stage, the easiest part. There are dozens of videos online how to flock a dash, its quite simple, just work quickly. I didn’t use any special tools, just prepared my work area well, so that everything was ready to use etc . Normal paint brush working quickly to spread the adhesive. Then used the Donjer flock applicator (the cardboard tube), and applied as much flock as I could, even if the area appeared to be covered well. I used 2 bags of flock, and had plenty left over. With two bags though, I found not having to pick up fibers as often as I would have, had I only ordered one bag. Plus the first time I did this, I only ordered one bag, and was a little short in the end, on non visible parts of the dash.
Took two pictures, one with no flash, one with flash. 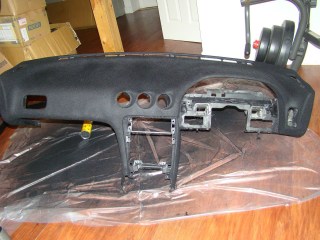 The previous owner had left me with a rats nest of wiring to deal with, so I watched a video on youtube on how to use a multimeter, how to solder, ordered a soder gun, multimeter, some wires, and some connectors, and got to work. I have never wired anything before, but I thoroughly enjoyed it, it was kindof cool to see the defi products come to life, have the heads up display properly working with speed and rpm. Was a bitch to figure out at first what wires go where and where to tap in certain wires from the defi device as far as tach, speed, illumination wires etc and get it to work properly, but eventually I figured it out. 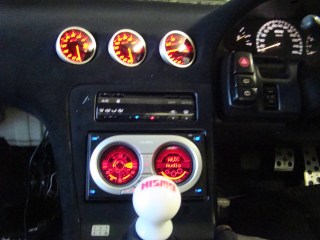 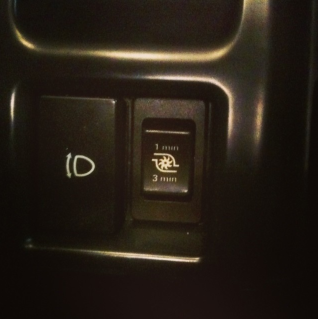