There is a story to almost every part I have, some better than others. While browsing the internet looking at drift events, forums, etc, I stumbled upon a picture of a car that grabbed my interest. But there was something very different about this car, that I absolutely loved, and wanted extremely badly. 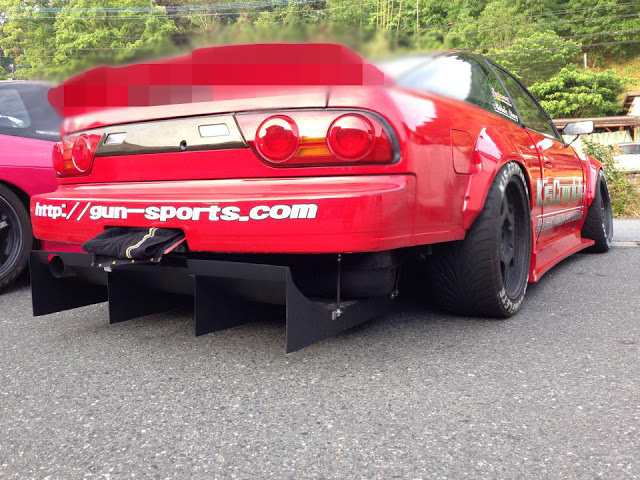 After messaging a few people I knew in Japan, with no luck on who gun-sports was or how to get a hold of  “Kis-Complete”, and if they even produced the wing, or ridgeback and I like to call it, for the public. Photographers, drifters, parts sellers, and just locals who were into cars, no-one knew who made it, or how to get it for me, so I took it upon myself to find out.
Now I’ve always been pretty good at finding things out, so I did a little snooping around, made some logical connections between photos, googling of addresses, googling almost every logo/name written on the car, and eventually I found the person who made the wing. I got a hold of him, and after attempting to speak to the person using google translate, he agreed to make a wing for me, and I found a way for him to ship to someone on Japan that could ship to me. I was extremely excited as this was 100% the third wing ever created in the world, the two others existing in Japan, one on the red car posted above, and another on a grey shop/demo car that was actually at TAS. So that was definitely something cool, to have the first, and only ridgeback of its kind in all of North America.
After waiting about a month or two for it to be made, it finally arrived.

Now, you might be asking yourself. Why is this guy blurring out pictures of the wing, I wanna see the damn thing.
After getting the wing, I posted up a picture of all my aero, which was mocked up onto social media groups, as I was pretty excited to show everyone what was happening with my car. 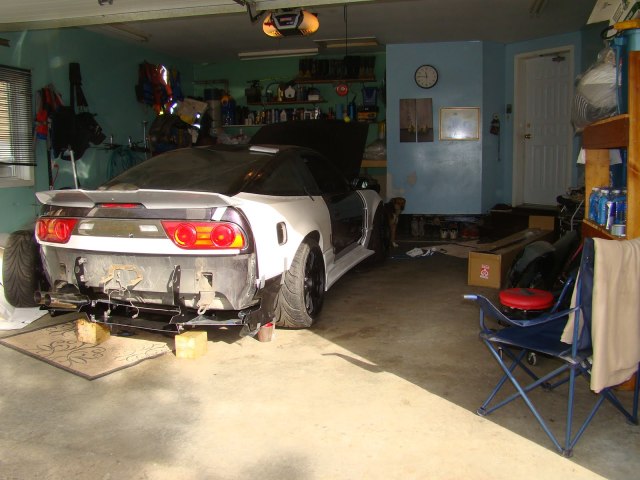 A lot of people asked, what kind of wing it was, where I got it, but knowing the aweful majority of the s-chassis community, most of them are poor, wouldnt be able to afford it and complain about price, and the last thing I wanted was for someone toxic such as JP Ramos to make a shitty replica of the ridgeback. I also enjoyed having something truly unique and special. Anyways my post started to generate a lot of interest, hate, envy, jealousy, all kinds of feelings. I saw several posts of my cars of people asking what kind of wing was on my car, if anyone knew etc, but I only had told people I could trust, the people who respect authenticity, and cool rare parts.

With enough fanboys an begging, the cancer had taken notice….

And got to work in the Dominican Republic somewhere in the jungle making shitty replicas as usual….

Lol mystery wing.
Anyways, I contacted the guy who sold me the wing immediately, and of course he wasn’t very happy either. There is much more to the story behind it, but he told me to talk joe schmoe, and joe schmoe talked to alot of other schmoe joe’s, and lets just say, because of this incident, I set in motion a conversation, that will possibly mean the end of JP fiberglass business. A lot of tuners in Japan are getting tired of this extremely toxic person who blatantly rips off designs, and sells them for pesos.
Sure call me an authenticity jdm fanboy or crybaby, whatever you want, but you can’t deny the fact that this kind of stuff is really hurting both the consumers, and manufacturers.
Just imagine if you were to create a good looking aero, have a set price on it, put a lot of effort into it, and produce a quality product that you are proud to put your name on. Then some scumbag living in some 3rd world country manages to get his hands on the aero you made, specifically to reproduce extremely shitty copies of your products, and sells them to cheap people for a 1/3 of the price. Poor fitment, poor durability, shitty materials used, poor craftsmanship, literally I could paper mache a body kit better than what this guy puts out.
I’m not saying it is Johusa Ramos to blame for this most recent epidemic of replica garbage, but its also the community. Without this generation of millennials who were given participation awards, his business wouldn’t be as “thriving” as it currently is. I mean, sure its cheap and looks similar, but where is the pride in owning a knockoff, there is only shame and embarrassment. Now, who really is the fanboy? The person that has the authentic parts? Or the person that wants to look like the person with the authentic parts, but buys a replica because its “cool”.
Don’t you want to be proud of something you built? Something that you can look back at that’s a testament to your hard work, patience, sacrifice?
I take pride in almost everything I do, or I don’t do it at all.
#liveauthentic
rant over, on to the build…
Whats your opinion on replica products??