Picking at the car slowly, when one day after work I stumble upon an auction too good to give up. A minty red Bride maxis. As I mentioned earlier on, the original plan was to go with a Bride Proface driver seat and the Cuga Japan edition seat as a passenger seat. I was trying to convince myself that these seats would be awesome, yes maybe in a newer car, but who are we kidding this is a 90’s car, interior filled with oldschool jdm goodies, the modern bride seats would ruin it, so I snatched the seat, and as usual it arrived quickly. I was semi nervous my seat was going to get held up because of the whole canada post thing where they were threatening to go on strike.

My Japanese parts obsession was getting to the point I was starting to form a pretty good relationship with the ladies at the post office as I saw them almost every two weeks. Usually they don’t really say anything, but with the weird shape of the box, the lady working had a good laugh and asked what the hell I was getting all the time. Perhaps she thought I was some psychopath building some sort of AI sex doll haha. 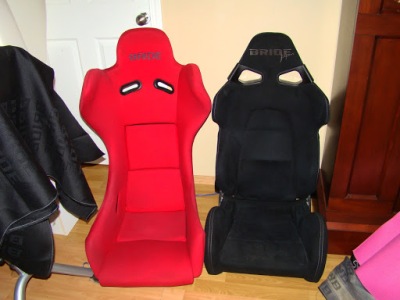 Anyways, I managed to hunt down an old Bride RX rail, long discontinued that would work with the newer Bride Cuga perfectly, but for some reason it was sent via sea post, so it was going to be a while before I got around to installing the seats.